Yew make me feel so young 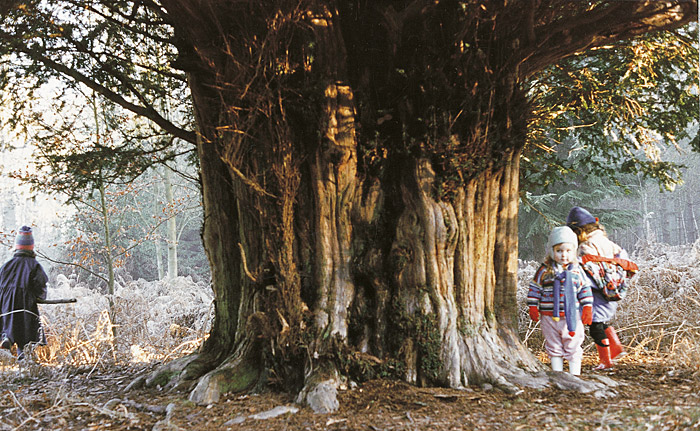 Yew make me feel so young

Our story begins about 140 million years ago. It’s the Upper Jurassic, dinosaurs roam coniferous forests consisting of trees just as big as them, early species of the Araucaria, Pine, Cephalotaxus, Ginkgo and Yew families, among others. The first birds on earth, descendants of Archaeopteryx, co-evolve with the early yew as we know it. Still today birds are the most important allies of Taxus baccata because they secure seed dispersal over great distances.

If you project the natural history of yew onto a calendar year, with the first true yew aril being eaten by the early bird on 1 January, natural history looks a bit like this:

• alongside yew, the multitude of conifers keeps developing, the forests very slowly altering their multi-layered interplay

• every day and every night yew bathes in starlight, the biosphere forever changes but at the speed of drifting continents … ages pass

• then, one day in July, the dinosaurs suddenly disappear

• in the wake of this shock to the ecosystems, however, the rodents develop. That’s a bit of bad news as some of them kill the seedlings by nibbling their roots, or devour loads of seeds before they even germinate. They can’t eat acorns yet because oaks don’t exist.

• But help is on the way: over the next few weeks deciduous trees develop. Not only do they help to disperse rodent pressure but they offer the most excellent neighbourhood! They half-shade yew from the hot summer sun and lose their foliage annually with good timing to ensure optimum sun exposure all through the winter when yew keeps photosynthesizing (right down to –8°C). Beech, ash, alder and some others become new important allies.

• Their other allies, the birds are also doing well. Nature comes up with ever new species, many of them sing now (unheard of!) and you think: these are the best dinosaurs ever, not too big, really cheerful, and always keen on sweet, fleshy yew arils and seed dispersal!

• Everything is in place now, and the rest is history. Or paradise rather. The summer of love, followed by the first golden autumn.

• New mammals appear too. Graceful deer which can do a lot of browsing damage to young trees. But somehow the mammal world seems to keep its own equilibrium: bears, lynx and particularly the wolf keep the deer at bay and protect the forest.

• At this point the happily ever after could have begun but just before the end credits of the divine movie a big surprise jumps into the picture: a strange mammal that has started to walk on two legs in Africa, in the small hours of 27 December. For a while the few specimens just mess about a bit like all new species do, but after a couple of days suddenly get really organized. In the last few hundred seconds before New Year’s Eve ‚man‘ upsets the balance of the entire biosphere. In the last 30 seconds he destroys the majority of the world’s forests, and the majority of yew trees too.

On the other hand, from a botanical ‚viewpoint‘ man is the only mammal capable of caring for plants as well! And he does. This ambiguity is also reflected in the cultural history of Taxus baccata.

Early man first encountered yew growing on the very rocks he himself sought for shelter. Over 70% of the world’s well-developed caves are formed of limestone, the very rock that provides the prime subsoil for Taxus baccata. The Palaeolithic caves of southern Europe not only possess famous animal depictions but also the ‚branch motif‘, a term known to historians of early art. Over 40,000 years (!) the branch motif does not change much but depicts a twig with needles, not long needles as in Pinus, not spirally attached as in Picea, not arranged in rosettes as in Cedrus, but short ones and neatly parted along the twig, just like those of yew. And the geography of this ancient art is congruent with the distribution maps of Taxus baccata.

The invention of writing gave us ancient texts up to five thousand years old. We learn that the ’sacred branch‘ represents the World Tree or Tree of Life which in one form or another features in practically every faith in the world. In the past, yew was often associated with it. As a guardian between this world and the next this tree has played a role in burial rites all over the world, for millennia. Hence its strong presence in churchyards in Britain.

But there’s also the other side of man, not the one who gives (care, water, plant food) but the one who takes. Yew wood has been a favourite for its many superior properties since the Neolithic lake dwellings in Switzerland. But mass destruction only began when medieval England needed yew staves for the yew longbow or ‚great war bow‘. Millions of them. Over four centuries this need instigated an international commercial trade that eventually left the entire Continent scoured of yews. This was the first grand-scale ecological disaster and it left a wound in the European landscape that hasn’t healed in the 500 years since.

The next major blow to the world’s yew populations followed in the wake of the discovery that yew contains anti-cancerous substances. The US Forest Service and pharmaceutical companies from various countries raided the majority of yew stands in America and in Asia. In the 1990s alone they managed what took four centuries in Europe: to bring yew to the brink of extinction in many regions.

Yew is on the red list of endangered species in many countries, and wholly protected by law in Germany and Austria, for example. A few dozen of ancients have survived the great storm of the European yew stave trade, they stand in France and Italy mostly, plus a few single ones in each other nation. But there is one country which alone is home to about 1200 old yew trees with a girth of 5m (16 feet) or more: it’s Britain (AYG database, status as of July 2011). The UK simply is a Noah’s Ark for some 80-90% of the most ancient trees of Europe. And of unique yews worldwide. The ancient and veteran yews of Britain deserve World Monument status by the UN.

In many other countries any of these trees would be considered a National Monument. But in Britain they still have no legal protection whatsoever.

During my research I met with botanists from ten different countries who are intrigued to the utmost degree by the unusual morphological spectrum of this species and the incredible variety of its genetic pool. And as science begins to fathom that the DNA of very old individuals can ‚learn‘ and change over millennia I would like to provocatively suggest that we should consider labelling every individual ancient yew as an endemic species in itself! Human classification systems just cannot do this tree justice. Remember that for the longest part in the history of botany Taxus stood forlornly between the conifers and the broadleaves; only when the definition of ‚conifer‘ was redefined in 2002 did yew begin to fit in. And far greater than the confusion about taxonomy is the confusion about the true ages of these old trees.

The situation is worrying. We need legislation for protection, but decision-makers need numbers, scientific data. The Ancient Tree Hunt project has begun to put a watchful eye on the trees themselves, but what is also needed is science: dendrochronology on churchyard yews, woodland yews, and especially cliff yews.

Our task is to preserve the heritage we’ve got for those who come after us. So they may enjoy the biodiversity of a living world.