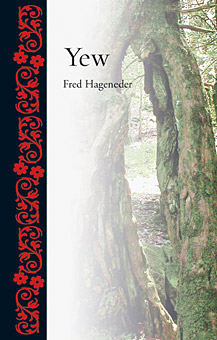 This comprehensive, richly illustrated cultural and natural history includes the latest scientific discoveries about this remarkable tree. The book will appeal to botanists and the general reader, as well as anyone interested in the history and symbolism of the natural world.

Botanists around the world marvel at the unique characteristics of the yew, Europe’s most ancient species of tree. It is a ‚conifer‘ without resin or cones but with juicy scarlet fruits that feed many birds and animals; it has foliage that is poisonous to livestock but which wild animals can eat; and though it has an extraordinarily low rate of photosynthesis, it can grow where other tree seedlings and plants just wither and die.

The yew’s lower branches can root themselves, and it can also produce ‚interior roots‘ inside a hollowing trunk, renewing itself from the inside out. It was in the Palaeolithic era that humans were first struck by the yew’s regenerative powers and began to associate it with concepts of life and death, the afterlife and eternity. Yew trees can be found at the sacred sites of Native Americans and Buddhists, and Shinto shrines in Japan, as well as Christian churchyards, where they became a symbol of the Resurrection. During the Middle Ages, these churchyards provided a safe haven for many yew trees while those in the wild were felled for the mass production of the longbow, a powerful weapon which enabled England to rise and ultimately laid the foundation of the British Empire – at the expense of almost the entire yew population of Europe.

“Yew is the most compact, knowledgeable and enjoyable book that I have ever come across on our (humankind’s) long relationship with these wonderful long-lived trees. No matter how much you already know about yews there will be many new nuggets of information within that will enthral, entice and educate.”
– Dr Peter Thomas, Keele University, UK

“If there is one tree that has stood still, witnessing the human civilization unfold, that is yew. Fred Hageneder’s Yew is a kaleidoscope that elegantly reveals the multifaceted and colourful nature of this marvellous tree – right from its microscopic anatomy, its geographical distribution, its historical legacy all the way through to its artistic expression, its sacredness and its conservation status. Delightfully illustrated and meticulously referenced, Yew is a must-have for everyone inspired by this magnificent tree.”
– Dr Shonil Bhagwat, The Open University and University of Oxford, UK

“Yew presents the history of this tree in a clear and enthralling way as well as exemplary from the scientific point of view. It will contribute to make yew, a species of great scientific importance, known not only to experts but to a greater public. Yew is considered essential for the study on the evolution of gymnospermae; it is regarded with great interest in modern medicine for its practical utility; it has an extraordinary cultural appeal because, more than other species, yew accompanied human events since prehistory. Nevertheless, yew trees are at risk of extinction in a number of countries. Hageneder’s work can contribute to their conservation.
I wish Fred Hageneder’s book the success it deserves.”
– Bartolomeo Schirone, Professor of Dendrology and Silviculture, University of Tuscia, Italy

“Fred Hageneder’s book opened my eyes on how interesting human history can be, seen from the viewpoint of a tree.”
– Dr Fabrizio Frascaroli, University of Zurich

“It is tempting to say that Fred Hageneder knows all there is to know about this species, but what he knows best of all is that there is still much to learn about the yew. It is that air of mystery that gives this well-paced and beautifully illustrated book its fascination.”
– The Times Literary Supplement, March 7, 2014

“This book is a real treasure trove of information about why the British yew is so important to nature, as well as socially, politically and culturally. Hageneder divulges the latest scientific discoveries about this fascinating and longest-lived of our country’s trees – some individuals are estimated to be over 3,000 years old – and discusses its regenerative powers.”
– BBC Wildlife Magazine, March 2014