Yew and misconceptions in religious history 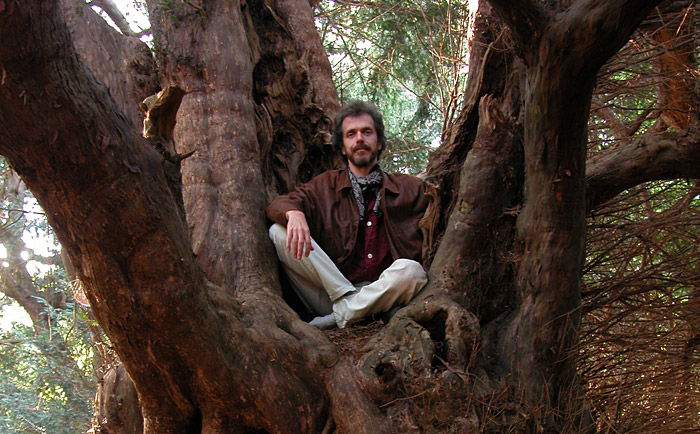 Yew and misconceptions in religious history

Q: Your new book, Yew – A History, takes a good look at a whole variety of areas of human life, from musical instruments to gardening to religion and sacred groves. Whom do you want to address with this book, what are the focal points?

FH: Apart from an in-depth study of the botany of this tree – an area studded with surprises, by the way – I guess the red thread through all the aspects of yew’s cultural history is a spiritual one. And saying this I am not talking about some exotic, superstitious ideas but rather about the core meaning of the word. The human quest for meaning in life, the ‚eternal questions‘: Where do we come from? Where are we going? What will happen after death? Around the world we find the yew tree time and again associated with this part of human life, namely philosophy, religion, birth and burial rites. In many ancient cultures the yew was more than other trees part of a holistic, all-encompassing approach to life and death. Yew was also present in musical instruments, kitchen tools, bridge-building or burial rites, it was part of almost all aspects of human life.
Hence this book is for anyone interested in trees, no matter what sub-topic. Cultural and religious history are especially represented in this volume – just because they are strong in the history of this tree. The book also contains a lot of unusual and rare photos of yew botany, special yew trees, and of yew artefacts of many kinds.

Q: What is the basis of your research? And why do you see the ancient symbol of the Tree of Life in the dark and gloomy yew, of all trees?

FH: I probably know every book by now that has been written since the middle of the 19th century about the mythology and religious aspects of trees. My previous books, The Spirit of Trees, The Heritage… and The Living Wisdom of Trees, I consider to be a compendium, a summary of ‚Western‘ knowledge about this subject. With Yew – A History I have taken a definite step further: I combed through volumes of general archaeology, history, mythology and literature, always searching for what has been overlooked in the past. And a lot came together that way!
Two examples: In many museums across Europe and beyond you find old and ancient artefacts that clearly show coniferous twigs on cult objects. Needle-bearing twigs. With needles not arranged spirally as in spruce (Picea), nor exceedingly long needles as in so many pine species (Pinus), but in yew proportion, neatly parted, and often even 1:1 life-size equal to Taxus baccata, yew. But because it was common in the 19th century for anthropologists to pay homage to their Christian upbringing, they declared every branch motif to be a ‚palm spray‘. Because the people of Jerusalem had waved at Jesus with palm sprays. Today, archaeologists don’t make assumptions and give interpretations anymore, but branch artefacts are still generally being called ‚palmette‘, and that is misleading enough.
Far worse is the language confusion. Already the classical Roman writers mis-translated tree names from Greek texts; the ancient Greek term for ’sacred tree‘ became Latinised as ’sacred oak‘. The same thing happened when the Old Testament was translated into Latin and then into European languages: the Hebrew word for a ‚female sacred tree‘ was translated as ‚terebinth‘ (Pistacia terebinthus, related to pistachio trees), the Hebrew word for a ‚male sacred tree‘ became ‚oak‘. Throw in a few centuries of Robin Hood folklore and the good old oak tree acquired more religious history than it originally had. While the yew lost out.
If you tidy these things up thoroughly, a lot comes to light which had been lost for more than two millennia. Furthermore, we have new insights from new discoveries, in ethnology and history, and archaeological finds. Eventually what emerges is nothing less than a real set of evidence that the yew must have been the original World Tree. This has nothing to do with my personal views, the only thing I could creatively contribute to this body of evidence, apart from the gargantuan labour of compiling everything, is the observation that yew is also the only tree species whose natural distribution range coincides with the territories of those ancient cultures which have a World Tree tradition. Britain, Scandinavia, Turkey, Iran, India, China, Japan – they have very different species of oak or rowan or ash, but they all have the one and only yew tree.

Q: What about the Old Norse World Tree then. Was Yggdrasil not an ash?

FH: ‚World ash‘ is a term that appeared only a few centuries ago and not in the original Icelandic poems and sagas but only in the interpretations of the material, in secondary literature. At a time when the original texts had long ceased to be understood in their original context and meaning. The old Skaldic poetry, an elaborate art of professional poets second only to the Celtic Bardic tradition, faded with the Middle Ages. One of the main characteristics of Skaldic poetry is to obscure the meaning of things by never ever mentioning a thing by its name – a ship might be called a ‚wave horse‘, an arrow a ‚wound bee‘, a warrior a ‚battle tree‘ (see Kenning in Wikipedia.) This was a code that could be understood only by those with a deep knowledge of Norse mythology. A language for the initiated, good for entertaining contests of poetic wit and very handy when it came to obscuring things from the ever-watchful eyes of the missionaries. But centuries later, scholars from Germany and Britain came across the material and took the expressions literally. In two places in the Eddas the World Tree is called askr, a term which indeed may translate as ‚ash tree‘, but it was also the word for a specific type of wooden bowl in old Iceland. The association of an overflowing receptacle like a bowl with the World Tree is universal, it symbolizes the nectar, the food of the Gods (‚honey dew‘ in Norse tradition), also the fertilising rain, coming down from the heavens and being channeled through the life-giving tree to the human world.
And that is the other aspect of Yew – A History: I try to show by means of comparative religion how ancient these symbols really are. It doesn’t help to look at certain traditions from certain regions in isolation, you’ve got to try and see the whole picture: how symbols migrated across the face of the Earth, how the agricultural revolution took not just new seeds to new places but the mythology of a plant species as well. That is why we can find such striking parallels between Celtic and Norse tree traditions and ancient Hittite culture or that of the proto-Sumerians from three millennia or five millennia before the Eddas were even written. The traces go back as far as the Middle Stone Age. And the nice thing about that is that it underlines our common origins as humans: Europeans, Persians, Caucasians or Japanese – we are all children of the World Tree.

Q: Would you call your work esoteric or scientific?

FH: Well, what do you mean by ‚esoteric‘? I absolutely hate it when someone says that angels or aliens or tree spirits have told him or her this and that and now we should all act upon it. It creates one guru and a followship without dignity or mental capabilities of their own. But this kind of human behaviour doesn’t mean automatically that tree spirits don’t exist. I do believe there are many things our limited human mind and senses cannot grasp. And until we know better we should treat everything with respect, particularly living things.
It’s a natural-born curiosity that drives me to research, I want to understand more and more of this beautiful, complex creation! But not just for professional research, as private persons too we all should check our sources of information and verify them – especially the data coming in from outside but also, from time to time, our inner beliefs, motivations, and preconceptions. I guess I am ‚holistic‘ in my approach to science, I am not afraid of metaphysics. And I account for psychology and how it influences what we find – and what we search for to begin with.

Q: What are your future plans?

FH: I have worked on this book for four years. The yew took me on a journey through millennia, I had wonderful times beneath the oldest trees of Europe and Turkey. But I have spent a little too much time in British graveyards, looking for ancient yews. That can get a bit lonely. I feel I need to arrive in the present again, return to my music, meet (living) people. And then there is a seed that’s just germinated inside of me: a general tree book for children. [See Tree World]

Q: Good luck with everything! And thank you for this interview.