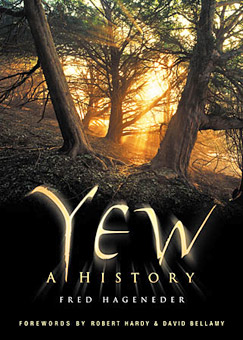 The first book to cover all aspects of botany as well as the cultural history and mythology of the Yew. This is the remarkable story of the oldest living things in Europe and their endangered future.

The yew (Taxus baccata) is much more than a 'churchyard tree'. Around the globe, botanists marvel on its many unique traits, e.g. its ability to live to a great age, and to start a new lease of life from almost complete decay. It grows roots from arching branches and adapts to climates as diverse as those of northern Britain and the Mediterranean. This needle-bearing tree isn't a conifer either! And its impact on human culture throughout the ages has been equally rich in surprises.

At the forefront of interdisciplinary yew research, the author elaborates on the botany and natural history of the yew as much as on the ancient traditions, myths and customs coming from a vast span of different cultures – the British Isles, Central Europe, Asia Minor and Japan. And every step of this amazing journey is illustrated with stunning photography by some of the greatest British tree photographers.

• The story of the yew has a rich cultural and historical background – it was the Tree of Life, the tree in the Garden of Eden and the original Christmas Tree

• The isolation of an anti-cancer agent from the bark of the Pacific yew in 1966 has caused the systematic destruction of yew trees in North America and elsewhere, for example 90% of India's yews have been destroyed

• Fascinating historical stories – for example, the British obsession with using yew for the medieval long-bow caused the destruction of the yew across continental Europe because the wood was superior.

See also articles and interviews for more about the yew

'This book is a work of art and a labour of love. The scholarly case that it presents is both exciting and sustainable.'
-- Professor Ronald Hutton, Department of History, University of Bristol

'A well-researched, broad and comprehensive, excellently illustrated and scientifically accurate monograph about one of the most fascinating tree genera of the world.'
-- Dr Arthur Brande, Technical University of Berlin, Ecological Institute, Department for Ecosystem Research and Plant Ecology

'Few books on trees have come garlanded with more praise than this, but for once the praise is justified. Fred Hageneder is one of those rare writers whose knowledge matches their enthusiasm. Fred's subject is certainly well chosen, for the yew is a puzzling and mysterious tree: a conifer that has berries instead of cones, highly poisonous yet eaten by all kinds of animals. The book divides into two halves: the first concentrates on its scientific background and the ecological history of the yew, while the second looks at what one might call its social history.'
-- Tree News, issue 21, autumn/winter 2011

'This new edition is a beautiful and fascinating publication about the yew tree in all its aspects around the world.
The book is filled with beautiful colour images of wonderful yew trees in the wild, and also photos of mundane and sacred objects made from yew wood, across cultures from England to China and beyond, spanning several millennia. This is the definitive story of a species of tree and the relationship humans (and other animals and plants) have had with it across cultures and times.
From myth to magic, art to architecture, medicine to the Mysteries, the yew is explored in delightful depth – dip into it for random facts, or read it to swot up on your specialist subject. A perfect book for anyone who loves these wonderful, powerful, magical trees.'
-- Sacred Hoop, issue 72, 2011

'Fred Hageneder's gorgeous book encompasses not only the botany of this extraordinary tree but also its historical and religious associations and makes fascinating reading.'
-- The Good Book Guide, June 2007

'As its name suggests, this book is dedicated purely to one tree and it tackles the subject admirably. It is written by a founder member and current chairman of Friends of the Trees, but by profession Hageneder is an ethnobotanist. As a result he goes much further into the more obscure aspects of his subject than one might expect, probing into every aspect of their range, structure, reproduction, and longevity. He dwells lovingly on the tree's toxicity, for example, explaining that apart from the bright red aril – flesh – of the berries, every part is poisonous to man and most animals. Then there are detailed drawings and macro photographs of the leaf structure and an examination of the puzzling phenomenon of 'bleeding' yews.
This level of detail should not put off amateurs, however, for his love of the subject matter shines out of every page. The photographs are wonderful and endlessly fascinating, while the text bubbles along effortlessly. As a result, while it makes a wonderful 'dipping' book, many people will devour it from cover-to-cover.'
-- Tree News, issue 13, spring/summer 2007

'A new history of the yew tree describes Britain as a veritable Noah's Ark of outstanding veterans. According to its author, Fred Hageneder, we have the highest density of them in Europe. Worldwide, the only comparable stands are those in Turkey and the Caucasus, which, unlike our own gloriously accessible giants, are largely concentrated within impenetrable mountain forests. "Britain," he says, "has a special responsibility to protect these trees because they effectively belong to the world's, not just our, heritage."'
-- James Douglas, 'Raiders of the lost bark: the last crusade', The Telegraph, 16 Jan 2008