The Wonders of Yew

The Wonders of Yew

Article by Fred Hageneder in Holfordiana,
the official magazine of the National Arboretum, Westonbirt, UK 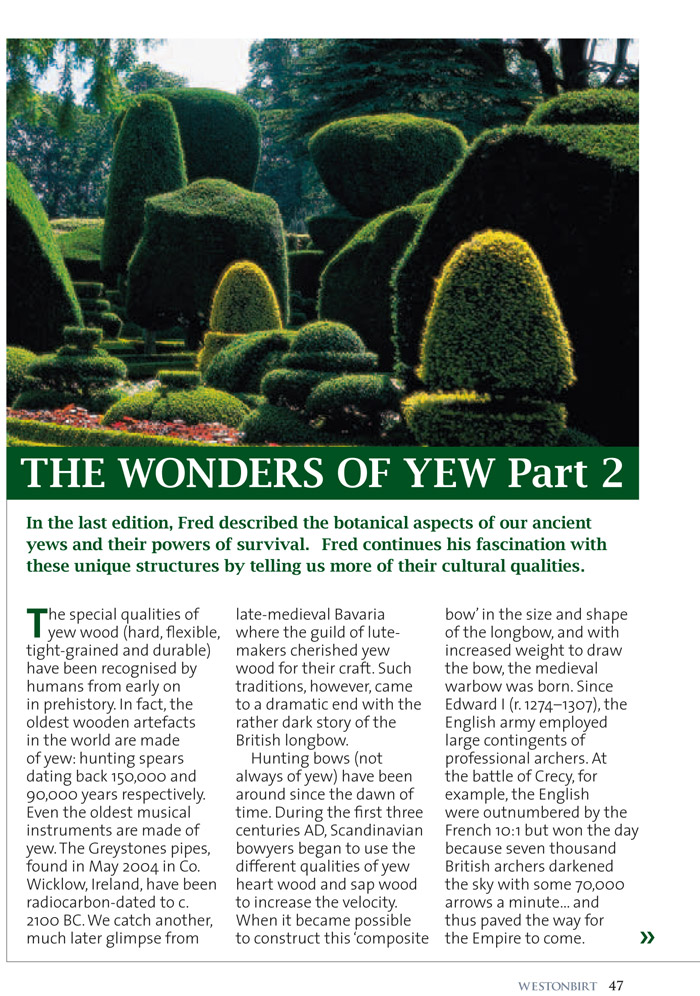 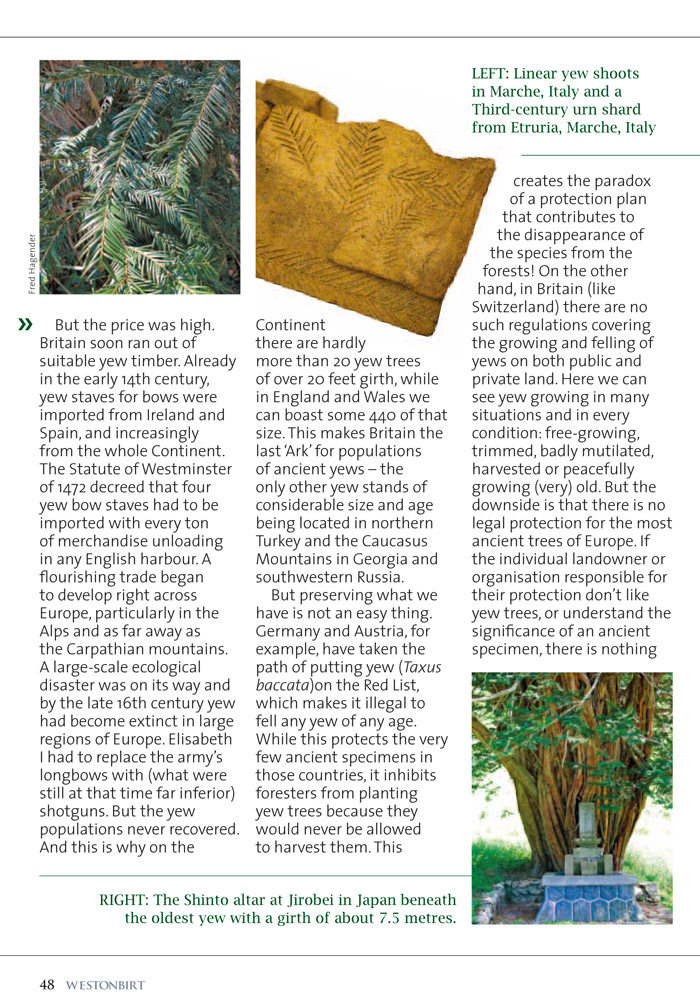 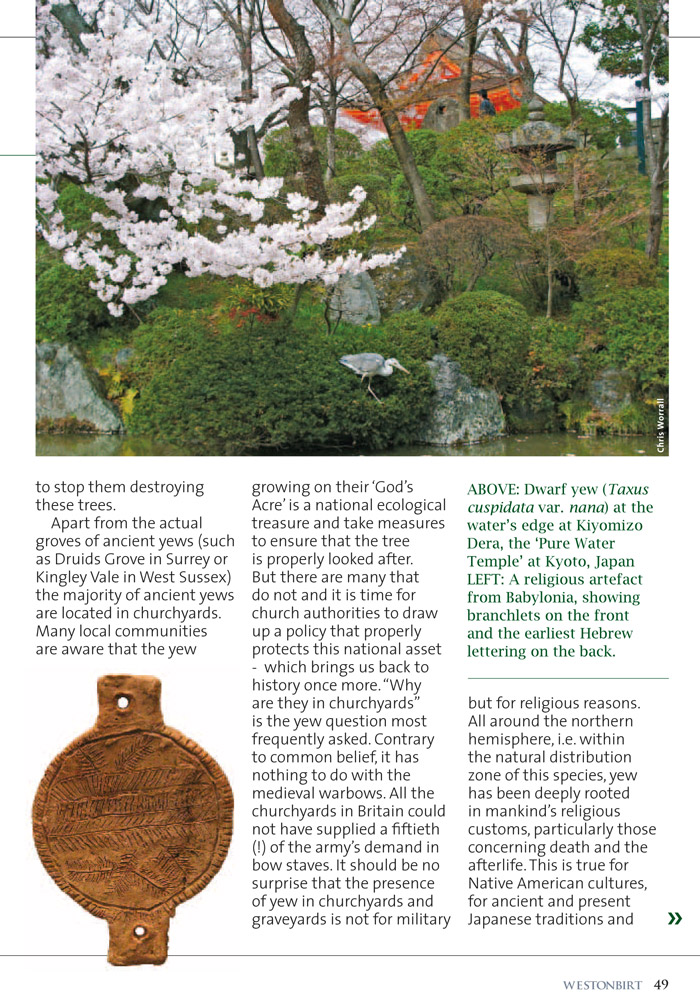 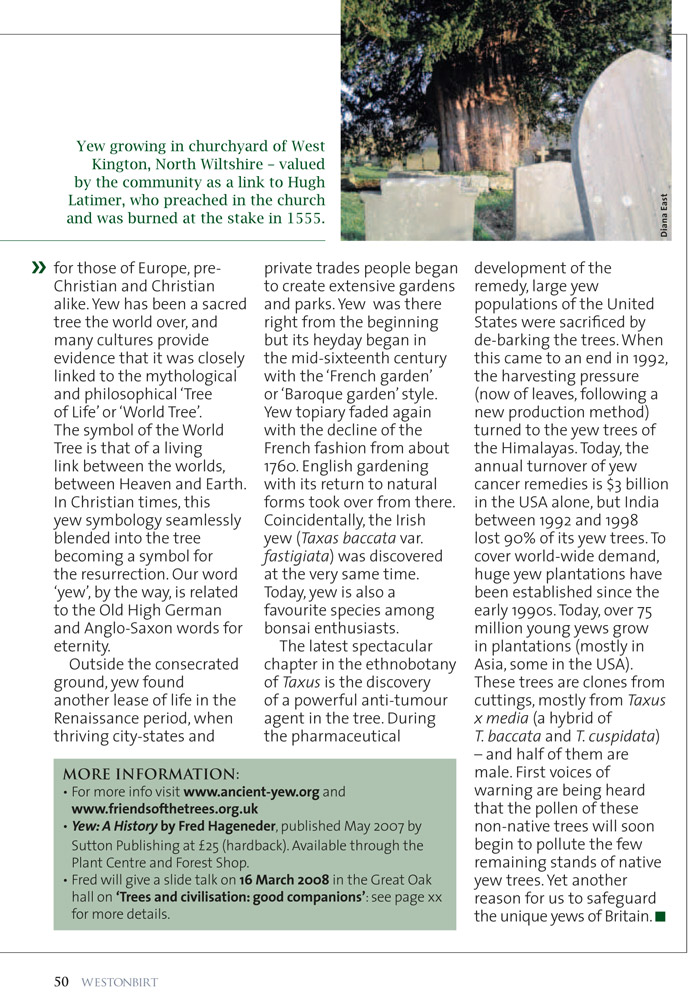 The special qualities of yew wood (hard, flexible, tight-grained and durable) have been recognised by humans from early on in prehistory. In fact, the oldest wooden artefacts in the world are made of yew: hunting spears dating back 150,000 and 90,000 years respectively. Even the oldest musical instruments are made of yew. The Greystones pipes, found in May 2004 in Co. Wicklow, Ireland, have been radiocarbon-dated to c. 2100 BC. We catch another, much later glimpse from late-medieval Bavaria where the guild of lute-makers cherished yew wood for their craft. Such traditions, however, came to a dramatic end with the rather dark story of the British longbow.

Hunting bows (not always of yew) have been around since the dawn of time. During the first three centuries AD, Scandinavian bowyers began to use the different qualities of yew heart wood and sap wood to increase the velocity. When it became possible to construct this ‚composite bow‘ in the size and shape of the longbow, and with increased weight to draw the bow, the medieval warbow was born. Since Edward I (r. 1274–1307), the English army employed large contingents of professional archers. At the battle of Crecy, for example, the English were outnumbered by the French 10:1 but won the day because seven thousand British archers darkened the sky with some 70,000 arrows a minute … and thus paved the way for the Empire to come.

But the price was high. Britain soon ran out of suitable yew timber. Already in the early 14th century, yew staves for bows were imported from Ireland and Spain, and increasingly from the whole Continent. The Statute of Westminster of 1472 decreed that four yew bow staves had to be imported with every ton of merchandise unloading in any English harbour. A flourishing trade began to develop right across Europe, particularly in the Alps and as far away as the Carpathian mountains. A large-scale ecological disaster was on its way and by the late 16th century yew had been made extinct in large regions of Europe. Elisabeth I had to replace the army’s longbows with (what were still at that time far inferior) shotguns. But the yew populations never recovered. And it is why on the Continent we know hardly more than 20 yew trees of over 20 feet girth, while in England and Wales we can boast some 440 of that size. This makes Britain the last ‚Ark‘ for populations of ancient yews – the only other yew stands of considerable size and age being located in northern Turkey and the Caucasus Mountains in Georgia and southwestern Russia.

But preserving what we have is not an easy thing. Germany and Austria, for example, have taken the path of putting yew (Taxus baccata) on the Red List, which makes it illegal to fell any yew of any age. While this protects the very few ancient specimens in those countries, it inhibits foresters from planting yew trees because they would never be allowed to harvest them. This creates the paradox of a protection plan that contributes to the disappearance of the species from the forests! On the other hand, in Britain (like Switzerland) there are no such regulations covering the growing and felling of yews on both public and private land. Here we can see yew growing in many situations and in every condition: free-growing, trimmed, badly mutilated, harvested or peacefully growing (very) old. But the downside is that there is no legal protection for the most ancient trees of Europe. If the individual landowner or organisation responsible for their protection don’t like yew trees, or understand the significance of an ancient specimen, there is nothing there to stop them destroying these trees.

Apart from the actual groves of ancient yews (such as Druids Grove in Surrey or Kingley Vale in West Sussex) the majority of ancient yews are located in churchyards. Many local communities are aware that the yew growing on their ‚God’s Acre‘ is a national ecological treasure and take measures to ensure that the tree is properly looked after. But there are many that do not and it is time for church authorities to draw up a policy that properly protects this national asset – which brings us back to history once more. "Why are they in churchyards" is the yew question most frequently asked. Contrary to common belief, it has nothing to do with the medieval warbows. All the churchyards in Britain could not have supplied a fiftieth (!) of the army’s demand in bow staves. It should be no surprise that the presence of yew in churchyards and graveyards is not for military but for religious reasons. All around the northern hemisphere, i.e. within the natural distribution zone of this species, yew has been deeply rooted in mankind’s religious customs, particularly those concerning death and the afterlife. This is true for Native American cultures, for ancient and present Japanese traditions and for those of Europe, pre-Christian and Christian alike. Yew has been a sacred tree the world over, and many cultures provide evidence that it was closely linked to the mythological and philosophical ‚Tree of Life‘ or ‚World Tree‘. The symbol of the World Tree is that of a living link between the worlds, between Heaven and Earth. In Christian times, this yew symbology seamlessly blended into the tree becoming a symbol for the resurrection. Our word ‚yew‘, by the way, is related to the Old High German and Anglo-Saxon words for eternity.

Outside the consecrated ground, yew found another lease of life in the Renaissance period, when thriving city-states and private tradespeople began to create extensive gardens and parks. Taxus baccata was there right from the beginning but its heyday began in the mid-sixteenth century with the ‚French garden‘ or ‚Baroque garden‘ style. Yew topiary faded again with the decline of the French fashion from about 1760. English gardening with its return to natural forms took over from there. Coincidentally, the Irish yew (Taxus baccata var. fastigiata) was discovered at the very same time. Today, yew is also a favourite species among bonsai enthusiasts.

The latest spectacular chapter in the ethnobotany of Taxus is the discovery of a powerful anti-tumor agent in the tree. During the pharmaceutical development of the remedy, large yew populations of the United States were sacrificed by de-barking the trees. When this came to an end in 1992, the harvesting pressure (now of leaves, following a new production method) turned to the yew trees of the Himalayas. Today, the annual turnover of yew cancer remedies is $3 billion in the USA alone, but India between 1992 and 1998 lost 90% of its yew trees. To cover world-wide demand, huge yew plantations have been established since the early 1990s. Today, over 75 million young yews grow in plantations (mostly in Asia, some in the USA). These trees are clones from cuttings, mostly from Taxus x media (a hybrid of T. baccata and T. cuspidata) – and half of them are male. First voices of warning are being heard that the pollen of these non-native trees will soon begin to pollute the few remaining stands of native yew trees. Yet another reason for us to safeguard the unique yews of Britain.