The Heritage of Trees 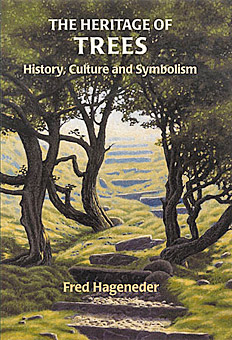 The Heritage of Trees

Exploring the history and meaning of trees throughout history, this book shows us that, from the earliest times and in the most diverse cultures, trees have been associated with the gaining of knowledge and wisdom, with healing and nourishment, with the arts of writing and memorising, and most of all with the powers of love and consciousness. Trees were seen as gates, gates to other states of consciousness reached by prayer and contemplation.

This book is about the impact of myths and legends on ecology, and what we can learn from the past to care for this planet's future.

The Heritage of Trees – Reviews

'The author takes us on a fascinating tour through time and space, revealing why almost every recorded culture revered certain trees. We discover what the tree meant to the Indians, the Arabs, the Minoans, Greeks and Romans, to name but a few Old World cultures. Then we are taken to northwest Europe, looking at the Celts and Germanic tribes and to the Baltic peoples, the Fins and Slavs of northeast Europe. Beliefs, festivities, ceremonies and folk customs of the various communities that have existed throughout the millennia are detailed. …
Hageneder explores the concepts of the Cosmic, or World Tree and the Tree of Life, visions of which mystics and seers of all ages and cultures have glimpsed. …
What comes across in this book is the universality of 'tree worship'. Descriptions from entirely different sources and ages … correspond exactly. Particular species of tree (most notably the Yew and the Oak) were regarded as sacred by more than one people.
A delightful book to read, well researched, very informative ... really interesting and with plenty of illustrations.'
-- New View, spring 2002

'This book is sensitively illustrated with various line drawings, maps and prints. A real gift for those interested in the deeper meaning of trees.'
-- Scientific and Medical Network Review, April 2002

'What most struck me about this book is its coherence and unity in the definition of cultural connections, and the expressive language. There is an equality of value in the range of traditions and beliefs illustrated; whatever cultural background a reader has there is something in that culture acknowledged as being part of the essential message of the meaning of spiritual grace. This unity is enhanced by the interweaving of examples of metaphors and concepts from contrasting ages and continents. …
What the book does for me is to create a framework for the process of discovery, as it generates thought rather than just containing information. The variety of moods, styles and metaphors, some from fascinating obscure sources, feed the desire to explore the sources further. …
Among all the richness of evidence one lesson which stands alone is a simple statement related to a discussion of Moses and the Burning Bush in the Old Testament, and Peredur and the Tree of Knowledge in the [Celtic] Mabinogion:
"Of course, the tree is burning with the presence of the Great Spirit, and this is maybe all we need to learn from the Tree of Knowledge: that the physical world (the green half) and the spirit world (the burning half) are an inseparable unity."'
-- Ann Whitlock, Touchstone magazine, June 2002

'A very different book about trees which took me on a long journey from the cosmic tree of the beginnings of world evolution to the Christmas tree of today; and everything between!
Hageneder wrote this book as a sequel to The Spirit of Trees in which he describes the natural life and ecology of trees. In this companion volume he starts at the beginning of evolution, which made me realize that without trees man could not have evolved. What shelter could early man have built for himself without trees, what tools could he have made and how could he have hunted? It even provided him with sanctuary in sacred groves where he found inspiration and inner peace. …
Our journey takes us through the old world of Mesopotamia and the Garden of Eden, … in India we get acquainted with the still existing sacred trees and groves; we find the Buddhist Tree of Enlightenment, as early Buddhism did not depict the Buddha in human form. …
A fascinating book, well researched and richly illustrated. It deserves to be read by all of us that have an interest in the Tree at the centre of world evolution.'
-- Ernst Nef, Camphill Correspondence, June 2002

'This is not a book for the faint-hearted, or the average person who simply loves trees. It is a scholarly account, expertly researched, into the significance of trees to various world religions and cultures, outlining the reverence that sacred trees and groves have received throughout history.'
-- The Countryman, April 2002

'…but we also learn where it all got lost. Christianity had no time for nature worship. … And still: the Bible starts with a tree in paradise and Jesus ends his life under the olive trees of Gethsemane and on the wooden cross. …
"Perhaps in its third millennium, Christianity will come to rediscover its ancient heritage of the Tree of Life and redirect its energies into a new covenant with nature."'
-- Earthwatch, issue 56, spring 2002